Keeping Gliders in Colonies of Three or More – Part 2 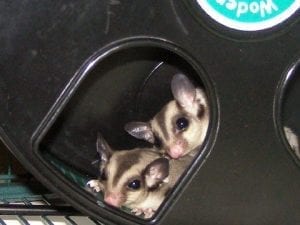 It seems to make sense that since sugar gliders live in colony groups in the wild comprised of both males and females, then the same should apply in a captive environment, right?  Well, this is not necessarily the case.  As we stated last month, larger groupings seem to work quite well when the sugar gliders are introduced to each other at a rather young age, preferably as joeys.

We have tried several groupings of older gliders in the past and will no longer attempt this type of arrangement with breeding gliders.  With non-breeding gliders, we have set up some rather large groupings with great success (up to eight same sex gliders in a single habitat).  With the older breeding gliders, we consistently had a problem of one female bringing joeys to full term and the second (usually more submissive) female having her joeys “stolen” at some point and killed.  We suspect that the more dominant female was typically the culprit, although this data is difficult to verify.

Regardless, like most animal lovers, we had a difficult time accepting such behavior and made a decision to no longer attempt this type of breeding model.  We tried this with three separate trios and had the same experience every single time.  With our “younger” trios that were raised together since they were 8-10 weeks out of pouch age, we have never had such an experience.

Another pitfall we see to breeding gliders in colonies of three or more is the increased difficulty in keeping track of lineage and family trees. You end up with a lot more “related gliders” when you breed in this manner, as many offspring will have common fathers.  We feel that it is incumbent on any responsible breeder to ensure that all offspring that leave the breeding facility together should be unrelated or neutered if there is any possibility those sugar gliders could breed at some point in the future.  The smaller the breeder, the higher likelihood of interrelated offspring.  A less diverse gene pool is inevitable when colony breeding techniques are employed.

Done properly, keeping sugar gliders in colony size groups can have some distinct advantages and create a much more natural “family” which best suits the sugar gliders free range nature.  Just be sure to have a sound understanding of introduction procedures with gliders and weigh the pros and cons before making such a decision.  We’ve never tried any colony breeding in excess of three critters per habitat, although we are considering introducing some foursomes in this year.

And speaking of foursomes, it’s now time to hear from Arnold, who shares his abode with three others playful pals!  By the way, for those of you who don’t know this, Arnold and Buddy, the two males of this group are both neutered and live along with Janine and Naomi. This arrangement works out exceedingly well!  It also helps to have areally big cage as the family expands!

Last month I ended my monthly column asking our audience a few questions.  My point in asking these questions was to see if we could ascertain the reasoning behind many people “diet jumping” with their sugar gliders when proven and established diets exist.  I also asked a couple of questions on glider weight and exercise activities.  I received a lot of response to the question of why people are compelled to change their glider diets.  And my second two questions were hardly acknowledged at all.

I see this as a very revealing lesson and I appreciate those of you who’ve taken the time to share your experiences.  The feedback was overwhelming similar.  In every response, the primary reason people chose to change diets is because their gliders “were not eating” foods offered in other diet plans.  Not a single respondent stated that the felt the diet they were changing to was superior to the diet they were changing from.

As a result of this query and as a result of the literally hundreds of questions that come into SunCoast, it is apparent to me that many people have unrealistic expectations of sugar glider dietary habits.  For example, how much should a glider consume on a nightly basis and how consistent should their nightly appetite be?

In my opinion, it seems that too many people are willing to jump around and try different diet plans without giving particular diets enough time.  This practice in itself can be upsetting to the sugar glider’s system.  It is recommended that when dietary changes take place, that it is done slowly over a two to four week period.  That is, begin adding more “new diet” each day and using less “old diet” until only “new diet” is used.  This will lessen effects of digestive system upset.  An obvious sign of such upset would be diarrhea within a day or two of trying a new diet and diarrhea is never a good sign.

Sugar gliders are not gluttonous eaters, in most cases.  As stated many times throughout my articles and on this website, portion control is critical.  Most people tend to overfeed their sugar gliders and this not an advisable practice.  Sugar gliders are notorious for picking out their favorite foods, filling up and ignoring the other offerings in the meal.  This can easily lead to diets that lack in nutritional balance and completeness.

Nightly variety in the glider diet is important.  Sugar gliders can get “food spoiled” rather quickly.  In other words, if you feed them the same thing over and over again, it becomes challenging to get them to try anything new.  For those of you familiar with parrots, this is analogous to having a “seed junkie”.  That is one reason that I am a proponent of using a rotational diet.  It not only helps prevent boredom with the diet, but helps prevent gliders from getting food spoiled and refusing to eat until you feed them “favorite” foods.  For example, if you feed them mealworms every single night, your gliders will anticipate this and expect it every single night.  You may even notice behavioral changes if you try and break the pattern.

So how do you handle gliders that seemingly refuse to eat certain items?  I am going to offer you several suggestions in this regard.  Choose a good proven diet plan and stick to it!  It is rare that a glider will starve itself to death because it does not like what you are offering.  It may take up to a month to get a glider in tune with the right diet plan.  So don’t worry if only small portions are eaten for one or two nights straight.  If your animal is simply refusing to eat anything at all for two or three nights straight, you may wish to make a veterinary appointment.  Other issues may be impacting the animal’s desire to not eat.

We get a lot of calls from people who have relatively good eaters, but seem to eat hardly any food for one or two nights in succession.  Do not panic.  Animal eating patterns can be affected by a variety of issues, not all of which are understood or identified (Debbie and Lisa like to blame it on phases of the moon or weather events).  This is very apparent when you see similar behavior run across the whole SunCoast colony.  But for the average glider keeper, who has one or two gliders as part of the family, this type of event may seem highly odd or unusual.  Light eating behaviors that run for one or two nights are not generally cause for concern.  More extended changes in eating patterns can be indicative of other health issues.

Do not be afraid to use “tricks” to encourage your sugar gliders to eat foods that are part of the recommended diet you are following.  Tricking animals into consuming certain items is a common veterinary practice as well as animal nutritionist practice.  Many animals kept in zoos do not eat as well as they do in the wild, so the staff nutritionists come up with unique ways to encourage the animals to eat the foods they require for good health.

For example, I often prescribe oral antibiotics for treatment of a variety of infections in sugar gliders.  I mix the antibiotics in cherry flavored syrup and prescribe a dosage amount based upon the sugar glider’s weight.  This “trick” makes the process of giving meds more like giving a treat.  I’m sure you know someone who wraps their dog’s pills in cheese or luncheon meat to make the process of pill giving easy and painless for all.

Next month I will share with you some specific examples on techniques you can employ to encourage gliders to eat broader selections of food offerings and healthier balanced meals.

(Part 2 of Picky Eaters can be found here.)

Tune back in next month as we delve a bit further into coping with picky eaters.  As always, these topics are driven by your requests, so send your questions about glider health care issues by clicking here and we will do our best to include in a future edition of the GliderVet Newsletter.  I send my wishes for good health to both you and your sugar gliders.  I’ll see you again next month!