Dear ARNOLD:
The pet store said I should get just one sugar glider!
By Arnold 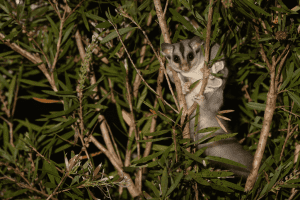 Hello , My name is Lilly . I had just added a new family member . And his name is Baby Bo. It’s really important to me that I’m taking care of my baby right. When I got my baby at the exotic pet (shop) , the owner told me that I should wait for two months until my baby bonds to me first before I get another one . If I was gonna get him a buddy , wouldn’t that interfere with him trying to bond with me?

Ya ever heard da sayin “jack of all trades, master of none?” In me humble opinion, dat sayin may’ve been made up cuz of pet store owners. Now some of them may be really, really good and really, really know all about all their critters, but many of them seem to know a li’l bit about each, but not a whole lot about any of them.

Now think about this, me friend. Yer parents decided to have you. But what if they decided you should never see any other peeps cuz they think you don’t need to see other peeps and only need them.

Methinks if that’d happened, you’d probably not be….errrrr…alright? Now me pulled up this website on a thing called hooman psychology. And if youz guyz are isolated for too long, seems like you go kinda bonkers. Methinks my research showed that bonkers is not a good thing for you.

OK, same thing for us. We need to be with other sugar gliders or else we can go bonkers, but cuz you dunno about suggie psychology, you probably wouldn’t know what our bonkers looks like. Plus we could be so upset by the alone thing, that maybe we decide not to trust you, or and bond with you, cuz we miss our own kind.

Bonding with two of us is not any harder, and sometimes even easier than bonding with one of us. See me? I’ve never ever been without other gliders by me side. It’s the way that Ma Nature designed us. And it’s the way we wanna live.

If ya accidentally made a decision to have just one of us cuz somebody told ya wrong, please get us a friend asap! Don’t wait cuz our happiness is yer responsibility. If ya wait, then ya have gliders of different ages and different sizes, so ya have to have two cages until they catch up to each other in size and maturity. And that just prolongs that which gliders need, which is other gliders.

Now off to play with me pals!
Socially yours,
Luv Arnold

Signs of Aging in Sugar Gliders
By Lisa

For years, we’ve been getting questions about the aging process in sugar gliders.  I held off addressing this issue because I felt it was best to wait until we’d actually raised gliders for a long time to share first hand experience with you on life cycle changes that occur in sugar gliders as they age. Well, it’s now been over ten years that I’ve been personally raising sugar gliders and I’ve had the honor and privilege to meet literally thousands of these precious little souls. Of course, most of our joeys are re-homed to new families, but I’ve had the chance to know quite a lot of sugar gliders from birth through the sad time when they’ve crossed the rainbow bridge.

I gotta tell ya, it doesn’t get any easier when we lose a sugar glider and is something I’ll never get used to. They are all beautiful, unique and special in their own way; each has a personality of its own and the capability to connect to people like no other tiny animal I’ve ever known personally.

It’s hard to watch our pets get older. The inevitable signs of aging are evident in sugar gliders, as with any other being.  The oldest glider in my care at this time is about 15 years. So now that I’ve been doing this for a long time, I’m actually questioning the common quote that sugar gliders live an average of 12-15 years. Frankly, I see little evidence to support that. I now believe, from my own experience, that sugar gliders CAN live that long – and longer – BUT this is not the average.

I spent 23 years as a CPA before becoming a full time sugar mama. To say I’m particular about record keeping is an understatement. I have a curious nature and like knowing things for myself. In over ten years of raising sugar gliders, and talking to thousands of people each year, I’m going to call this average lifespan a bit differently.

With good husbandry practices, I believe the average lifespan may be closer to ten years, and anything above exceeds the average. Poor husbandry skills may contribute to an average lifespan as low as five years.  Thankfully, through education, we can improve this situation to help ensure our beloved pets live healthier, longer lives.  We hope our pets will exceed the average life span, but many of us have lost pets prematurely, in spite of our own best efforts and doing everything right.  As with all living beings, genetic issues may play a role, which is one of life’s uncontrollables.

There are some common signs I see in geriatric sugar gliders.  And the onset of these signs sometimes happen as early as seven to eight years.  Any one, or some combination, of the following signs may be a sign your sugar glider could be entering the last stage of the life cycle:

This article was difficult to write, and may have been difficult to read.  But the intent was to educate on the most difficult part of having pets.  As a community of animal lovers, this situation is an experience which we all have, or will eventually have, in common.  Remember, many sugar gliders remain youthful and spirited well into their double digits and will not show all of these signs.  With that said, may all your sugar gliders live happy, healthy lives that extend to a ripe old age!

The Story of Fondue: Male parts overexposed
By Lisa

NOTE: This article will contain some description of the reproductive process. Please be advised that the content of the article may exceed our normal G rating. This article is rated PG.

My foray into breeding gliders of extreme exotic color has not been extensive. Of course, we’ve been breeding white face sugar gliders for quite awhile now. And we’ve also entered into an accidental program of breeding for black faced sugar gliders, and this was all quite by luck. I say this because we did not intentionally pair a dark male and dark female to see what would happen.  It just happened and we’re hoping now to focus more on developing this coloration.

Quite recently I’ve acquired some cremino and het for cremino sugar gliders.  From this group, there is one cremino male named Fondue. Prior to coming to me, Fondue had never been with female sugar gliders. He is a young, mature male and his introduction to two new females, Miga and Violet, was all about love at first sight.

In less than a week’s time, things got rather amorous. Sugar gliders are not at all shy about the mating process, and obviously Fondue was not wasting any time in becoming a new father. Once breeding was complete, we noticed Fondue had still not retracted his, ahem, male part. This happens on occasion and when it does, it is advised that we intervene and provide lubrication to assist the male in retracting his part back into the cloaca.  I’ve been breeding for many years, but this sort of intervention is not something we have to do frequently, AND I’ve never had it not work!

So now I have my most expensive sugar glider ever and we’re rushing to the vet for an emergency visit. Dr. Sanders was the first vet we were able to book an appointment with and he suggested we try a solution designed to help reduce swelling. It appeared that Fondue’s cloaca was quite swollen, although it didn’t appear red or inflamed. Dr. Sanders also suggested a treatment of an antibiotic in the event that the area did start to become infected. In many of these cases, gliders will pay extra attention to the area because it does become inflamed and this can lead to further complications and even self mutilation. Fortunately, this did not happen with Fondue. However, the treatments did not seem to be working to reduce the swelling and his male part was exposed for over two weeks after treatment began. We made a couple of trips back to the vet for further examination and discussion of options.

Dr. Sanders told me that he would typically recommend a hemi-penectomy, which is Dr. speak for amputation (ouch!). However, since Fondue did not seem to be in any discomfort, was not messing with the area and is such a beautiful, rare sugar glider, Dr. Sanders suggested we wait to make a decision on surgery until such time there was some indication that he was either experiencing pain, or started paying excessive attention to his cloaca area.

Fondue has since fully retracted, but not until after his part became very shriveled and brown. We are not optimistic about his future chances of fatherhood. The good news is that Miga has two joeys that should soon be out of pouch any day now and we are hoping to announce the emergence of the first cremino glider ever born at our facility soon!

Our decision about Fondue has been to put him with a standard gray female for companionship once he has helped Miga raise the young. This will give us vital information on how well a male glider is able to recover from such an experience. I’ve since acquired Fondue’s brother, who will become the future companion of Miga and Violet so we can move forward in our breeding program with cremino gliders. While we feel deep down that Fondue will not be able to father young again, I am optimistic about his future. He is a very sweet little guy and through all this trauma, handled the vet appointments well. If it turns out that he can’t ever become a papa again, I plan to have him neutered and let him live here on the island of misfit toys that I affectionately call my family. What’s one more, right?

Wish us luck and if you’ve ever desired to have a cremino glider in your family, be sure to (Sorry, no longer available).