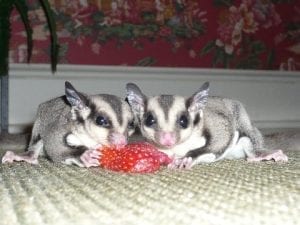 I had an interesting visit with a married couple coming to pick up their first sugar gliders and a thought occurred to me during that meeting. The wife is a nurse, so as the thought came, I had someone quite knowledgeable in the health field that could enlighten me further.

After introducing a couple of babies to this married couple, I observed something I’ve noticed before: Why is it that sometimes one spouse can handle a glider with no problems (i.e., the animal remains calm and comfortable), yet when the other spouse handles the glider, it reacts so differently?  Observing this behavior with just one animal is something I would not jump to a conclusion on.  But when you see the same trend happening with couples handling multiple animals – both gliders responding consistently well with one spouse, yet not the other (AND you have personally handled these animals and know something of their temperament) – you have to wonder, what could be going on?

We have known for a long time that our personal body smell can affect how sugar gliders respond to us.  For instance, using scented lotions, soaps, perfumes and colognes can all affect how the animals perceive us because a large part of recognition is smell.

But watching these little animals consistently chomp into the husband’s hand really got me puzzled.  This man didn’t look like the kind of man that used scented lotions or perfume, but I did inquire about the soap he had used on his hands, or whether there be strong food smells.  While the sugar gliders were not crabbing or acting defensive toward him, they were treating him like he was the most delicious giant mealworm ever!  It was as if they wanted to eat him, and so they bit and gnawed their way into his displeasure.  His wife commented that the soap at the hotel they stayed at the night before was lemony, so he went and washed his hands.

As he walked away, I asked the wife if he was a diabetic, which she confirmed.  Then I asked if it was possible his blood sugars could be off; and she indicated that based on his choices for breakfast that morning, she suspected his blood sugars were probably high.

Then the conversation got more interesting. I suppose I’ve heard this before, but never gave much thought to it.  When a diabetic has high blood sugars, they can smell like fruit.  So you see, the gliders really loved this man; in fact, they thought he was sweeeeeeet!  They just loved the taste of him so much that they literally wanted to eat him!

We often consume things that can have an impact on our smell.  It may be a prescription, over-the-counter medication / herbal remedy or food we have eaten / diet we are on. Sugar gliders may respond by trying to taste a yummy, delicious person!

This theory just might explain why some people feel like they are getting far too many, overly ambitious love bites.  So if you are the only one in your household getting many aggressive love bites, while no one else in your household is, you may want to think about these examples.  Just some food for thought!

A Tale of Two Sugar Glider Colors
by Lisa

I am a big fan of the message boards and think they are wonderful places to enjoy communing with like-minded individuals.  The sugar glider community is a very strong and fervent one.  I know quite a few people who breed other exotics and I’ve been told over the years that their communities are not as active, nor as passionate!

However, I often see a weakness in this avenue of learning: an attitude of absolute-ism.  Participants often jump to conclusions based on really skimpy or unproven evidence, and convince others to “get on board”.  Because of the nature of the internet, some ideas continue to be re-stated over and over again by those who were touched by an initial comment, and the more these ideas are repeated, the “truer” they become in the community.  I would like to encourage message board participants to use more complete evidence in their assertions; for example, include evidence from outside the discussion group.  Or, admit complete evidence is not available, meaning the correct answer is “we don’t know for sure, but my opinion is…”.  Having an opinion is why these groups exist, but when opinions are routinely stated as facts, that’s a different story.  In the long run, stating unproven opinions like they are scientific facts can damage the community and can even cause harm to the animals.

I think the “theory” of brown sugar gliders will give you a good idea of how absolute comments made in the sugar glider message board community can change from undeniable fact to a non-issue.

Years back, many people were warned away from brown sugar gliders because if they were brown, they were “wild caught”, and many folks (including myself) did not want to support that kind of business.  This chatter cases you to THINK it is true that wild caught sugar gliders are brown because you’ve heard that over an over, BUT I’ve never had direct experience with wild caughts, so I cannot say this is a fact.  Yet I have no basis for saying it is not a fact either.

Then things start to evolve.  Wild caught gliders are stressed.  Any change is stressful, so I can say this with a high degree of certainty:   stressed animals are more likely to get sick.  As a result, many wild caughts that were sold as pets died.

So now what we have is: wild caughts are brown AND wild caughts have a higher mortality rate due to stress.  Yet, as often can happen in online chatter, the story started evolving into this: “Brown gliders will die!  Don’t get a brown glider!”  The warning against wild caughts has now effectively lost its original meaning, and as a result, now all brown gliders are prejudicially regarded as high risk.

I’ve seen very few sugar gliders that were born brown, yet I have a lot of brown sugar gliders and none of them wild caught.  One joey that was born here, whom I kept and named Janine, was one of the most unique sugar gliders I’ve ever seen born at SunCoast.  She was a delicious chocolately brown AND she had a significantly thicker coat of fur that, to this day, I have never seen on another glider!

On occasion, we’ll see some joeys that are browner, but here is what I’ve observed in the case of most brown sugar gliders here at SunCoast.  The joeys are born gray and when they are very young, they have a distinct apricot tinging around the shoulder blades.  Babies with this coloration as joeys seem to morph from a gray with some apricot color, to all gray; and then as they mature, they turn more brown with a creamier belly fur.  I’ve seen this phenomena since we first began breeding, and I’ve seen nothing to indicate that sugar gliders who are born brown – or those who morph into a browner tone – are any less healthy than their gray counterparts.

When customers call us and ask specifically for a brown sugar glider, they will often hear me hesitate.  And the reason I do is simple: I’m not 100% sure which gliders will turn brown, and more importantly, to what degree the brown-ness will develop, since the majority of brown coloring that we see is a morphed trait.

The moral of this story is that nothing is wrong with brown gliders; all the online chatter around this idea was wrong.  We cannot determine wild caught versus breeding based on color alone; it’s a very unreliable gauge, insofar as health and background.  If you are concerned about the wild caught issue, just ask whomever you are getting your gliders from, because this is a classic example of where assumptions can lead us into a completely uninformed decision.

The story of the brown sugar glider is about a time gone by, as people do not feel this way anymore.  Is there something going on presently that may be a repeat of the brown sugar glider story?  Well, there sure appears to be a lot of rumblings these days about leucistic gliders and I’m seeing a distinct trend of people rejecting the ones that have “golden” markings (some call this color yellow) as inferior or defective in some way.

For those of you who are not familiar with the leucistic trait, these sugar gliders are all white with black eyes.  The difference between a leucistic and albino from appearance standpoint is eye color.  The albinos have red eyes and the leucistics (a.k.a. leu) has black eyes.

Just as I’ve stated above about our experience with brown sugar gliders, we’ve bred leucistics long enough that we can say with a great deal of confidence that the ones who stay more white versus the ones who’ve turned more golden are equal in health.  I’ve kept some siblings from different birth events and I can see that even from the same parentage, there is a slight variation in colors with offspring.

Yet, why was it that earlier this year, I got flooded with phone calls for leucistic sugar gliders and almost every single person asked if they were yellow or golden?  And when I responded that the joeys where white, but this one has a golden Mama, I would just hear “oh” on the other end of the line, as in “oh my, that is not good.”

And what proof, or solid experience, is out there this is not good?  My experience is that it’s not different either way.  And I can only wonder how some of these ideas get started and why they get so much momentum without anything really solid to base such a claim on.

And just like that, the calls stopped and the babies found homes and my customers who got ones that are now getting golden are in love with their little creamy sugar boogers!  And I have no doubt that if the humans do a good job, they will enjoy their little leucistic suggies for many years to come.

I would like to just end with this one last simple thought.  I remember when white boxer dogs were uniformly put to sleep and now I know quite a few people who keep and adore their white boxers.  Was it bad information that something was wrong with white boxers?  Or did we as a society believe something that was just untrue?  And how did that crazy idea begin?

I think we all have a responsibility to be part of the solution for the welfare of all animals, so please be mindful about what things you read about online.  Too many people out there are willing to take one comment as an absolute truth that applies far more broadly than the initial author may have intended.  This does not serve the animals well, nor does it reflect well upon us as a community.