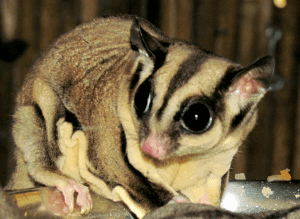 Dear Lisa,
Sorry, I couldn’t resist.  I know you like dispelling sugar glider myths- I’m sort of the same way with ferrets.  This is from a very reputable site:

“Domestic pet ferrets, Mustela furo (sometimes called Mustela putorius furo), are not wild animals.  They have been domesticated for a very long time, perhaps two or three thousand years.  They’re not equipped to survive for very long on their own; escaped pets suffer from dehydration, starvation and exposure, and usually don’t survive more than a few days unless someone takes them in.  Unlike cats and dogs, ferrets aren’t even large enough to push over garbage cans and scavenge.

Domestic ferrets are generally believed to be descended from the European polecat; they were originally used as hunting animals to catch rabbits and rodents.  They weren’t supposed to kill the prey, they just chased them out of their holes and the farmers (hunters) killed them.  This practice is now illegal in the U.S. and Canada, but it’s still fairly popular in the U.K. and some other places.”

It is unknown exactly when ferrets were first domesticated, but ferret remains have been dated to 1500 BC.[1]

So they are not “wild” (though they are sometimes classified as “exotic” for really no good reason).  The rest of your article is very good.  I run a ferret rescue so I do a lot of public education about ferrets.  I do have sugar gliders, but they are kept far, far away from the ferrets.  Both the ferrets and the sugar gliders have their own separate rooms.

Dear Heather,
I’ve received several such emails after last month’s newsletter, and well, when I’m wrong, I’m wrong!  I will not try to weasel my way out of my ferret folly.  I did not realize that ferrets were considered domesticated and I thank you for shedding light on this for me and for our other readers.  I certainly feel more fluent in ferret-ese now.

Sugar gliders do not seem to have any natural fear of other mammals.  I am also a dog lover and tend to keep large breeds.  My sugar gliders have always felt bold enough to challenge the dogs.  Size does not seem to intimidate gliders.  So what happens is when a glider fails to run away from a potential threat because they do not have the instinctual sense to be afraid, they are simply not large enough to defend themselves.

I honestly believe that sugar gliders have no idea how small they really are.  I think more often than not, the gliders meet with their untimely demise because their own natural curiosity draws them right toward a potential threat.  Ferrets, dogs, cats and other animals may often just be exhibiting their own playful nature causing irreparable injury to the diminutive sugar glider.

So always play it safe.  Unless you know that your other pets are going to be totally cool with smaller critters, don’t introduce them or allow them to interact.

Another Exciting Episode of Dear Arnold –
Male Baldness and Sugar Glider Sneezing
by Arnold (of course!)

I have a quick question regarding male baldness – when does it happen?  My kids – Chuck and Bob – are turning a year old this month. They haven’t started losing their hair. Do you know when the baldness typically happens?

Wow!  Are ya sure they are really a year old?  It should have happened already!  Most guys get their bald spot when about five to six months old.  Any chance Chuck and Bob have been neutered?  Write back, OK?

I adopted them at 8 months old and the previous parents were sure they had not been neutered (which they had them from 3 months old).  Could they have been neutered when they were 3 months old? That seems so young.  Is there any health concerns that would prevent them from losing their hair that you know of?

They could have been neutered at 3 months old, but seems like ya would have known about it.  It’s kind of a big deal.  We get over it pretty quick like, but it’s expensive and most humans would remember this.  Do they have a white fuzzy pompom where you would expect to see a belly button?  That’s something only boyz have.  And we dunno of no health issues that would prevent the guys from getting bald.  So that’s probly not the problem!  Are ya sure they are boyz?

I see they have a little fuzzy worm, should there be an additional pompom if they are not neutered?

Methinks we’re getting somewhere now!  If you see like a fuzzy bumpy thing at the base of the tail, that is called a cloaca and boyz and girlz have this same fuzzy bumpy thing.  Where ya would expect to see a belly button, the girls have a little “U” shaped pouch and the boyz have the fuzzy white pompom.  Now if the boyz are neutered, they mights have a pompom still and they might not!  BUT!  I think all along, we’ve been on the wrong track.  Ya see, I think Chuck and Bob are really Charlene and Roberta!  Case closed!  Next?

Debby and Ken in upstate New York here.  Hope all is well.  Hanna Banana is on her fifth joey!  Joey Bean – Ben and Jerry Bean – and Jilly Bean.  We don’t know what this Bean will be yet, but what ever it is, two things for sure, it will be cute and a Bean!

I’m writing because every night for the last month or so, when Hanna wakes up she sneezes and sneezes and sneezes.  She rubs her nose and sneezes more.  The other Beans don’t but little Hanna does.  Do you have any clue what it could be?  No changes in diet or home – a little drier air and I have humidifiers running at all times.

Anything I should look for?  Other than the sneezes all is great, just a bit worried.

Good to hear from ya!  How ya bean?  Gliders do make a natural sneezie sound when cleaning.  Maybe Hanna Banana is extra clean. She’s keeping herself tidy and the new little Bean clean.  If she has a cold, she would likely have a runny nose or watery looking eyes.  Just keep close tabs on her.  She may just being going overtime on caring for her coiffure.

Bean nice hearing from ya!

Arnold “Bean There, Done That” Schwarzenglider