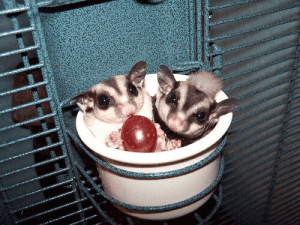 Anyhoo, as grand poobah, I am announcing a Spinulus Package!

Get yer fave fuzzbutts one er two toys at a souper price!  ‘Cuz of me negoshiashuns, yer gettin a souper deel.  But when they’z gone (we have about 1 per state), they’z gone!

So don’t be like my mum – instead, share da luv with your suggies in February.  Afterall, itz da munth of luv!

Giardia: Review of a Major Study
By Lisa

Last month we made a resolution to investigate statements made by a company selling sugar gliders about Giardia for the community.  The statements I am referring to are: “All Sugar Gliders carry Giardia” AND “(giardia) can be very useful in balancing their digestion”.

To back up just a bit, Giardia is an intestinal parasite.  Further, we thought the purpose of making these claims might be to cover up the fact this company was selling sick sugar glider joeys.  These folks take a very human-centric, hamster-like approach to caring for sugar gliders that won’t kill them, but won’t make them very happy either.  We call this the Thrive versus Survive issue.

Over the last month, we took this information to three different vets. Two of the vets located an identical study already completed and published on the Veterinary Information Network (VIN). VIN is only accessible to veterinarians and is a paid subscription service which allows veterinarians to network directly with other veterinarians.

From the VIN website: “Since 1991, VIN has been the number one online veterinary destination – and always has been and always will be — for veterinarians, by veterinarians.” What this means is that people like you and I cannot access this service. This maintains the integrity of the service to the highest standards set by the veterinary community.  Here is the topic and publishers of the article:

Identification of Zoonotic Giardia Genotypes in Marsupials in Australia

The letters after the names indicate the background of the person doing the research, detailed here:

If you search for this report online, you will find references and summaries of it, and may be able to pay for a copy of it, depending on the source.  It is a very long, and challenging read and I believe most people just want to know the bottom line anyway.  So now that we have established the credentials of the authors and scientists involved in this study, I will summarize it for you.

This study screened fecal samples from a variety of captive and wild marsupials. To be exact, 421 fecal samples were analyzed using a variety of testing methodologies which far exceed the standard protocols of testing done in a veterinarian office. Sugar gliders are included in the numbers of marsupials tested. Approximately half of the marsupials tested lived in the wild and the other half were residents of one zoo and three wildlife parks. The samples were collected over a thirteen month period.

The results from both the captive and wild groups were remarkably consistent. In the captive group of animals studied, the presence of giardia was recorded at 13.4% overall. The rate of positive screenings for wild marsupials was found to be 13.7% overall.

We believe this information clearly demonstrates claims that giardia is present in all sugar gliders are completely false.

Interestingly, after we posted our research intentions, the website making this claim changed this information.  We can only hope that we have also influenced them to be as truthful in the rest of the information they distribute to potential and current customers.

Further, no vet we talked to could in any way support the statement that giardia can be useful in balancing digestion in sugar gliders.  And one vet gave us this direct quote:

“Regarding whether or not Giardia can aid digestion: No.  Giardia is a parasite, not a comensal or symbiotic organism.  Comensal would mean that it lives on/in another host, but causes no harm.  Symbiote means it benefits the host, and it benefits from the host.  Parasite means its existence is by definition a DETRIMENT to the host.  Now you can argue that some Sugar Gliders may be more negatively affected than others, but Sugar Gliders do not benefit from giardia infection.  Giardia acts to inhibit absorption of nutrients from the small intestine.  That does not benefit a host animal.”

The same organization putting out this false information goes even further by saying the appropriate remedy to one symptom of a giardia infection – diarrhea – is to give the sugar gliders Pepto Bismol or Kaopectate.  Our vet’s response was:

“Per the treatments, Pepto-Bismol contains ASPIRIN, a non-steroidal anti-inflammatory drug that we RARELY prescribe to animals.  These type drugs can be very dangerous, especially in the wrong amount, over long periods, in the wrong host (I doubt they have been studied in Sugar Gliders), or in dehydrated animals like animals with diarrhea.   They can adversely affect the liver, kidneys, and GI tract just like in humans, even cause death, and your chances of complication are much higher in an animal that is lacking body water.  I would not recommend this treatment.

BEST TREATMENT: Go see your veterinarian and soon, because these small animals can dehydrate and deplete their reserves quickly.  The goal should be rehydrate (1/2 strength Gator-Ade, Pedialyte, etc.) and stop the diarrhea.”

And according to our USDA vet, who concurs with the above response, adds to it by telling us that Pepto Bismol or Kaopectate may mask signs like diarrhea, but will not get rid of the giardia.  There are three drugs that are commonly used by vets in the treatment of giardia, all of which must be procured through a veterinarian.  In other words, there are no drugs available to consumers over the counter that will get rid of the parasite.

The vet added if this information is being provided by a non-doctor, that diagnosing a problem and prescribing a treatment is practicing medicine without a license, and suggested we contact the FDA (Food and Drug Administration) or the AVMA (American Veterinary Medical Association), as there are laws that prohibit the practice of medicine without being licensed.  The USDA does not have authority over issues like this.

I asked the doctors why someone would make such a claim.  After all, what is the logic behind claiming all sugar gliders carry this parasite?  All three vets we spoke to said basically the same thing:  A breeding facility itself could have a 100% giardia infection rate within itself.  The infection could happen from water supply, food supply, or unclean conditions, to name a few.

If you ask me, a breeding facility with a high infection rate has no business selling animals.  Knowingly selling infected animals to consumers – and further indicating the disease is normal, easy to treat and not a risk to humans – is extremely dishonest and unethical.

And, if your sugar glider has diarrhea, please do not automatically assume your glider is infected with giardia.  Remember, diarrhea can stem from a number of internal parasites or other conditions, or from the diet.  The best course of action to take is to see a qualified exotic veterinarian and not attempt to treat the animal yourself.  It may mean the difference between life and death for your sugar glider.

Websites and message boards can be great places to learn about your exotic animals, but taking medical advice from any of these places is a really bad idea.  Without medical testing and diagnoses by a vet, you could be doing a lot more harm than good.

I asked a couple of our vets how many exotics they treated in their practice that were sick because of poor diet or poor husbandry.  Off the cuff, they said it could be as high as 90-95% of the exotics they treat, which is an astounding number.  Why are so many people so poorly educated on caring for their pets?

I can only think of two reasons.  Reason one, perhaps the keepers of these exotics just don’t care enough to take good advice.  Reason two, and in my opinion the largest factor affecting sugar glider care, is that these people are trying hard to do the right thing, but have  received inaccurate information about glider care from the organization they purchased their sugar glider through.

I often tell people that are considering getting sugar gliders to do their homework before buying or adopting gliders from any company, including my own.  It is so easy to Google a company; and I also think the best place to get the scoop on a company quickly from a lot of different people is to go on the message boards.  The largest are:

Some companies tell you to never ever go on a message board for information, because these boards are not USDA licensed.  Yet, message boards cannot be USDA licensed, so we’re not sure what the point of this message is.  You don’t need a USDA license to know things about gliders.  Vets are not USDA licensed (they may be certified) but they are not licensed in the sense that a pet store or breeder would be.  At the same time, just let me restate that takingmedical advice from any web site is a really bad idea, if offered.  The boards tend to be regulated very well and if medical advice is asked for, the typical response is “go see your vet”.

Raising standards in the breeder industry is part of our original mission statement when we started this newsletter.  When we see things that are detrimental to good husbandry, we will bring them up.  We know that some of you would rather us stick with a fun-filled newsletter.

But sometimes, when the impact of bad information gets too widespread, I have to use the resources available to me to set the record straight.  This supports my mission to be part of the effort to raise standards in the animal business, which helps to raise the husbandry skills of those interested in this particular species.

We hope you will stick with us in defending the health and well being of sugar gliders everywhere.