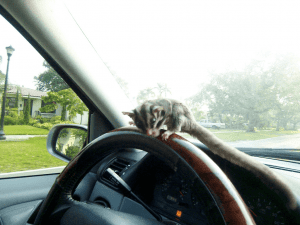 During the course of a normal day here at SunCoast Sugar Gliders, we have the opportunity to speak with and e-mail with lots of people who are just beginning to research sugar gliders as pets.  Many people are inclined to get just one sugar glider so they “can see how it goes first” and then intend to add a second glider later on.  If you have had the opportunity to deal with us one on one, then you know that we will do our best to discourage you from this decision.  As you get to know more about sugar gliders, you will discover that they are much happier with a companion.

A lot of people that we have the opportunity to correspond with approach us because they have a single glider and have come to realize that their glider would be much, much happier with a buddy around.  There are issues, however, that must be considered before you just go out, get another glider, and put them in a cage together.

Sugar gliders are territorial, so bringing a new glider into an established glider’s domain can lead to stress and fighting.  Here is a typical scenario we encounter.  Mr. Human calls and says “I have a one year old sugar glider and I really think my glider needs a buddy. Do you have any babies ready to go to new homes?”

Well, you see, its just not that easy.  Usually when you deal with a sugar glider breeder, the only sugar gliders that are normally available are babies.  And you can’t just bring a baby home and put it in with a full-sized glider.  If the established glider decides it wants to “defend the territory”, a baby will not stand a chance in that encounter.  Sugar gliders can react quickly and at times fiercely towards intruders.  Baby sugar gliders are incapable of protecting themselves if the established glider does attack.

So let’s run through a couple of different situations and what you can do to handle the introductions properly.  First of all, getting two joeys (babies) at the same time or close to the same time is by far the easiest situation.  Joeys tend to accept each other pretty quickly.  If the joeys are 8-10 weeks OOP (Out of Pouch), you can expect a fairly quick and painless process to ensue.

We suggest you introduce the joeys to each other outside of the cage, under your control, and on neutral territory.  In almost every instance, they will take to each other like bees and honey!  If any signs of possible fighting are observed, then you will need to set up separate cages and take the introductions a bit slower.

Set the cages side by side, but not close enough that they can reach each other.  On a nightly basis, swap their sleeping pouches or nest boxes so they become familiar with each other’s scent.  You are likely to observe that they will begin to “talk” to each other.  Every day or two, try introducing them outside of the cage until they “connect”.  Once they realize that this could be the beginning of a lovely relationship, you may want to put them in a neutral cage to let them start off on brand new turf together.  You can create the neutral cage by sterilizing the cage you intend to use and its contents so the predominant scent of no one glider is established.

OK, now we are starting to get into more difficult territory – older males.  You have an older male and you want him to have a companion.   You’ve found a breeder that has male and female baby joeys.  Older male sugar gliders are the most likely to show aggression and territory defense activities.  If he is an alpha male, he may never accept another male as a suitable companion.  However, if you bring in a female, it is very important that the female be at the age of maturity before you should begin introductions.   Reason?  The male will try and breed the female whether she is ready or not.  This could cause severe injury or worse to the female.

Now to complicate the situation, female sugar gliders do not show the outward signs of maturity that males do.  So exactly defining that age of maturity for females is quite difficult.  It has been our experience that females can mature anywhere from six months OOP to almost two years.  In general, most female gliders are capable of reproduction at around 9-10 months OOP age.  Do not despair, however!  There is a solution to introducing older males to new companion animals.  If you neuter the older male, then you can generally follow the same general guidelines that we discussed earlier on introducing older females to new companion animals.

But, you might say, “I really wanted to experience sugar gliders breeding”.  This can still be accomplished by bringing in same age younger male and female gliders and creating a trio of one neutered male, one intact male and one female.

So, there are a number of ways to address the situation of adding a new sugar glider, and we can pretty much always figure out a way to go.  But please be aware how this issue is approached depends a lot on the ages and sex of all the gliders concerned, existing and new!

Lot’s of times I sit in this room called the office. I like to hang out with Lisa while she types on the big lighted box … that whatmacallit computer thing.  She also talks to this little box called the phone. I like the phone too.  One time Lisa ignored me so I chewed off several of the buttons … yuk yuk.

I like to chew on some things. I think it’s fun.

My other fuzzy friends don’t bite down on things as much as I do.  My humans say I’m special.  Us suggies are all unique and we have different ways of expressing ourselves.

I sometimes express myself with looove bites.

Now, here’s the scoop, straight from my brain to your eyes.  Us sugar gliders do things sometimes just because we like it.  Ya see, sometimes sugar gliders will bite because they’re scared.  It takes us little fellars awhile to get used to you giant furless amazon slaves.  But once we like ya, well then we start to love ya!  You are our friend and our tree!

We think you are pretty nifty cause you can be two such wonderful things at one time.  Now according to my free ranging cousins, they will bite down on the bark of trees to get some sweet sappy, nectary stuff out of the tree to eat.  Sometimes I chomp down on Lisa, cause I think she is real sweet and it’s in my nature to chomp on my tree!

These are love bites, not to be confused with the bites of a scared,
defenseless un-bonded glider.  Love bites are the kind of bites you get when you’re just sitting around, holding us and scratching under our precious little chins and then we just casually go “CHOMP”.  Now, I don’t know for sure, but I don’t think trees are supposed to scream.  So remember that next time we are loving on you with our teeth.  Your screams scare us and when we get scared we could actually do the bad kind of biting.

Here’s what you do if you find our method of affection a bit too
painful.  I’ve trained Lisa to feed me treats when I love on them a little too hard.  One teeny tiny light little nip and the next thing I know the mealworm wagon is in town!  Once me little belly is full, guess what, I stop trying to bite the sap out of my tree!

Now one last word of advice for you gargantuan two legged critters, just remember that we have different ways of showing affection, but don’t ever forget that it is meant as affection.  Don’t return us to our cages.  That’s a punishment to be away from you.  But unfortunately some sugar gliders don’t like spending time with their humans as much as I do, and these sugar gliders can be pretty smart.  These sugar gliders might actually think being put back in the cage is a reward.  So be aware if you put gliders back in the cage every time they bite, you could be training them to ask for a return to the cage through biting.  If you encourage this behavior, you will both lose out cause sugar gliders and humans can make remarkable friends!

That’s great Arnold!  If I may, I’d like to offer some further advice.

From our own experience and from customer feedback, you may need to try several techniques to stop the love bites.  You may even need to try a combination of techniques.  It may sound weird to give an animal food when it nips; understanding that the nip is not malicious or aggressive will help guide your actions.  Sometimes gliders are looking for food and it is a great distraction from biting you to feed them something.

Also blowing on the back of the head can be a non-harmful distraction to them.  They don’t love it, but it won’t hurt them.  But thumping them on the nose is a bad idea.  Sticking your thumb in their mouth, a really bad idea.  Sugar gliders, like many animals, can become hand shy; you’ve probably met a dog or two in your life with this affliction. Do not do anything that would cause them to associate you with a physical “punishment”.  Gliders do not respond well to punishment and in my opinion, no animal should be punished into submission.

‘Til next time – in good health for you and your gliders, we sign off in