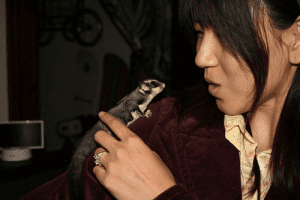 This article will contain some information about male sugar glider sexual anatomy.  So if you are reading this with your young children, you might want to skip to another article as we’ll leave the birds and bees talk up to you when you are ready to educate your child!

We get our share of “panic calls” from sugar glider keepers concerned that their sugar glider has worms.  Interestingly, it’s always a male sugar glider that the caller is afraid has some dreaded worm condition.  And the caller’s panic also creates a sense of panic in me as well, because I’m hoping that they’ve not done anything to try and treat the “worms” on their own.

The male sugar glider’s male organ looks like a pink stringy worm-like thing coming out of the cloaca.  The cloaca is the bump one will see near the base of the tail in both male and female sugar gliders and the male’s essential mating organ will be retracted most of the time.   Now what really messes people up when they see the male exposed is that they will often see two of these worm-like appendages, and many people are unaware that sugar gliders have a bifurcated penis, meaning it is forked.  So if it is not fully extended, it will actually look like two worms.

Please, please please put down the tweezers now!  Those are not worms and I’m sure your sugar glider would very much like to have his organs intact.  Sugar gliders do not have the tendency to get worms in the sense that puppies and kittens do.  You can almost pretty much know that puppies will have worms, and de-worming puppies is a very common veterinary practice.  If you expect your sugar glider really has worms, then please see a vet because different types of worms may require different remedies, or worse yet, it may not be worms at all.

So while we are on the subject of male anatomy, for those of you who have intact (not neutered) male sugar gliders, you will notice that as they mature, they start to develop two bald spots.  This too can cause panic in a new glider keeper when they start to notice that their young male glider starts going bald!  Hmmm, bet you thought this only happened to older guys, right?!

Well, male sugar gliders will develop two musk glands, and the most obvious one appears as a “bald spot” in the black diamond on top of the head.  The bald spots can vary in size, and can appear to be oily at times.  There is also a musk gland on the sternum (upper chest area), and while this one does not necessarily look identical to the head gland, it still emits a musky oil and often people become concerned because this oil will attract dirt and sometimes look brown and dingy on the chest gland.  This is just normal appearance for male sugar gliders and it is one of the ways that they will mark territory.

Territory is not just about where they live and where they sleep.  Marking territory is more than just leaving scent on physical surroundings and accessories in the cage.  Male sugar gliders will also mark the other sugar gliders in the colony.  I find it really humorous to watch the male mark other members of the colony.  He will hold them in his two front paws and rub his head vigorously on their body. In many cases, the rubbee is quite ok with being marked.  But as that is not always the case, the rubbee will let the marking male know, in no uncertain terms, that his smell is not welcome.  This is a sign you  should pay attention to.  Every colony needs a leader and if someone else is vying for the top glider position in the colony, competition can arise over who will be the alpha of the clan.

Also, the urine of a non-neutered male has a stronger smell than the neutered male sugar glider.  This situation is similar to cats, in that neutering will substantially cut down on the odor.  If a male has already developed his musk glands, they will close up in time after a neutering procedure.  Some male gliders may still maintain the habit of urine marking, but the good news is that the smell of the urine will diminish in time as well.  And the frequency of the activity will also diminish.  Generally speaking, I tend to prefer the temperament of the male sugar gliders, although I do not particularly care for the smell.  Sadly, most people find it to be a big turn off and many males are needlessly bounced from home to home when the simple solution is to have them neutered.

Female gliders do not generally urine mark, but I have had some female markers, and there is really little I can suggest to do about this.  The good news, though, is that like the neutered male, the female urine does not have nearly as potent a smell so it’s tolerable and really amounts to a small wet spot on your clothing without a strong odor to it.

I find the anatomical structure of male sugar gliders so interesting, as compared to other mammals.  The other male part that has commonly been referred to as their “pom pom” is north of the cloaca.  Because the cloaca protrudes a bit, many mistake gliders to be male because they are assuming that the cloaca is the testicles, but the pom pom is cuter, less technical name for the testicles.  You will see the pom pom where you might expect to see a belly button.  Determining the sex of sugar gliders is very easy and can be done as soon as they emerge from the pouch.  When the male is very young, he is not fully furred yet, so his soon to be white fuzzy pom pom looks like a small pink wart when he is young.  As he develops, the wart grows white hair and will eventually be about the size of a pea, so it’s quite easy to tell glider sex at any time during development.

So please don’t mess with the “worms” and certainly don’t panic if you see your little boy going bald.  These are just normal developments for a male sugar glider!