Fruit Skins and Seeds
By Lisa 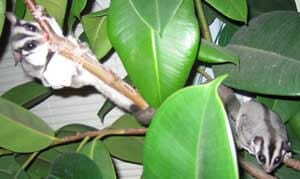 So where has Arnold been?  Well, he has some hair brain idea that people would love to see a TV show called Peel Or No Peel, hence his absence from his newsletter responsibilities.  Now how silly is that?! He plans to build a stage where he will have a whole bunch of beautiful woman on that stage with brief cases filled with mealworms.  One briefcase will have a million meal worms in it and the point is to try and win as many worms as you can.  Personally, I think it is ridiculous, but crazier things have made it on TV, right?

Then it occurred to me.  It never seems like that big of a big question when I get asked about peels, but it happens all the time!  The same goes for seeds that are found in certain fruits.  After all, everyone knows that apple seeds contain arsenic, right?!  Well, actually they do contain a poison, but it is not arsenic as reported on many websites.

According to one website on urban legend: “When we think of dangers lurking in our food, we tend to concentrate on the threats posed by chemical additives or by improper and careless handling.  Yet the truth is that we routinely come into contact with naturally occurring poisons in a number of the fruits we ingest.  Apples are one such fruit: their pips (seeds) contain amygdalin, a cyanide and sugar compound that degrades into hydrogen cyanide (HCN) when metabolized.  Cyanide itself is a poison that kills by denying blood the ability to carry oxygen, thereby causing its victims to die of asphyxiation.  At least within the realm of murder mysteries, cyanide is the darling of poisoners because it acts quickly and irrevocably — once a fatal dose has been ingested, there is no effective antidote, and death takes place within minutes.  It is sometimes described as having a bitter almond smell, but it does not always give off an odor, nor can everyone detect the scent.  Cherry, peach, and apricot pits also contain amygdalin.”

My friends, let me let you in on a little secret.  As we are responsible for quite a few sugar glider pairs, it is mission critical that we follow Dr C’s diet plan closely, which includes feeding daily fresh fruits or vegetables.  From a practical standpoint, it would take many hours each day to remove the skins and seeds from all the foods we feed.  We never did remove the skins, but we used to remove the seeds because we were right there with urban legend.  And while the legend is “true”, it is also true that sugar gliders are not at all inclined to eat the skins on fruits/veggies, nor are they inclined to eat the seeds.  As a result, we stopped de-seeding many years ago and have never had an illness result from that practice.

Our fuzzy little friends are smart. We can only assume they have some instinctual radar that tells them what part of foods to eat and what parts to leave behind.  Now we always wash our foods very well, because fruits and vegetables can carry parasites from handling/storage practices, so a good washing is always prudent.

We hope to learn more as to why sugar gliders and other animals seem to know when some things can be bad for them and this is on our list of questions submitted to Texas A & M.  But rest assured that your fuzzy buddies are smart enough to avoid the pitfalls of poisonous pits and seeds.  And just for fun, feed them foods with skin on next time and see how paper thin they can make it.  I never knew apple skin could look quite that way, and the apple skins are always left behind.

So Arnold, what do you say to this?  Peel or No Peel?

The Grape Controversy
By Lisa

This is an article that I personally feel cannot wait.  This is also on our list to Texas A&M, but sometimes the right thing to do is to share what we know now and to give the scientific explanations later.  I am compelled to share this with you somewhat prematurely because for years, our care sheet information has suggested that you feed watery foods to your sugar gliders as part of the diet rotation. Watery foods would include a variety of melons and grapes.  As we learn new things, I feel it is our responsibility to not only adjust our own practices, but to share this with you as well.

Did you know that a grape controversy even existed?  I’m starting to see them as the grapes of wrath and will no longer recommend them as a good fruit to feed sugar gliders.

My suspicions about grapes started as I reviewed events in hindsight, but first indications came to me several years ago.  We often get calls from folks with “mystery deaths”, and while I have no way to realistically help folks find the absolute answer of why their sugar glider died, my first question to them ALWAYS concerns diet.  Now for me, it’s no mystery that a sugar glider will pass prematurely when a fed a diet of cat food and peanuts.  And believe it or not, there are still new sugar glider keepers who are given such information from various breeders and pet stores.  While those numbers are dwindling as sugar glider education improves, it still happens and we all know what dreadful fate can come of that.

There have been, however, quite a few cases of mystery deaths where I was completely clueless, but I started noticing a trend where even those folks feeding a really good diet to their gliders were losing animals unexpectedly.  Some folks who felt they just had to know what happened forked out the big bucks to bring their dearly departed to a veterinarian for necropsy, and still came up empty handed.  The trend that I noticed was that on many occasions, grapes seemed to be a common denominator.

But who am I to scorn the sweet delicious grape?  It has never been our intention to simply editorialize in the newsletter and this is not something that will become part of a new format or platform for us. Empirical data is important.  Experiential evidence can often support that found to be fact by science, but we’ve been reluctant to ever rely on experiential data only.

If it were not for this next event, I would still be silent on this subject, but my gut instinct keeps telling me otherwise.  I was discussing my theory on grapes with an associate of mine and she felt that my assertions may be right on.  She told me that the ASPCA Animal Poison Control Center is looking into a connection between kidney failure in canines and the ingestion of grapes and raisins.  From several of the sugar glider necropsies (grapes were often present in the routine diet), kidney issues had been cited, but no direct connection to particular foods was indicated.  In the ASPCA information I was able to locate, the exact role of raisins and grapes are unclear, but seemingly directly related to the events.

I stopped feeding grapes to my sugar gliders nearly a year ago, waiting on more empirical data to rely on.  However, I continue to hear stories and I feel that it would be less than responsible of me to sit on this any longer.

And I wish to make this next point perfectly clear.  There has been NO direct connection nor direct studies done with sugar gliders and grapes/raisins.  And even our more popular friend, man’s best friend, who gets a lot of research money on their behalf is still waiting on results.  From a realistic point of view, studies this specific in nature for animals like sugar gliders are not likely to happen any time soon (or ever).  I often warn people about extrapolating their knowledge of other animals and applying it to sugar glider husbandry.  Sugar gliders are their own unique species.  But in light of the grapes being so close to so many events, I’ve made a personal decision to avoid grapes in my sugar glider diets.  Now I simply want to give you the option to make your own gut call on this one as well.

Update: Are oxalates the problem with grapes?  See this article.