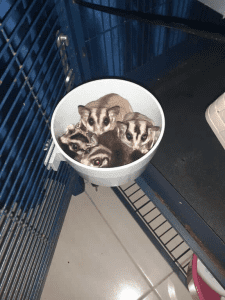 We always enjoy your newsletter.  So sorry to hear about Janine but that was a lovely tribute.

When our two gliders get out of bed, we sometimes notice a damp spot in the center of the chest of one of them.  The fur is parted and kind of brown.  I figured it was from sleeping with his nose tucked into his chest, but what do you think?

Thanks,
Kathy
——-
Heya there Kathy,

Did ya know that boy gliders actually get two “bald spots” when they grow up to big boys?  Methinks most people know about the one on top of the head ‘cuz it really is bald looking.  These spots are really musk glands which males use to color their world with their own personal perfume.  They get one on top of the head and one on the upper chest.  The chest gland kinda looks like a dirty grease spot and us gliders think it’s really rather handsome!

Methinks ya just have a normal healthy boy glider who is sporting his manly musk with pride!

Gliders catching and eating bugs in the home

After reading your latest information on the feeding of bugs (which I rarely, if ever, feed them), I’m wondering about insects that my two gliders have caught and devour, right from inside the house!  A few times, my gliders have leaped so fast and grabbed flying bugs mid-air!

It has really only been a Mayfly or two (seasonal) and a moth once or twice (in the summer time).  I did worry a bit (after I got over my excitement of witnessing them in full predator mode!) that the bugs might make them sick.  But they are fine and never got sick.  They were beside themselves with excitement, chirping and clicking, very proud of themselves!  It was fun to watch but what are the dangers of them eating bugs from the wild?

The bugs we talked about last month are bugs raised specifically to be fed to other animals.  Household bugs are never a good idea because the bug itself may be toxic or it may have come in contact with pesticides or other chemicals.

But, and this is a big BUT, if a bug gets near the glider cage, it’s now a meal and there is little we can do to prevent that.  So I think the best we can do is to try and keep the environment as free from pest bugs as we can, understanding that sometimes its just impossible to control that completely.  I tried to get a wild lizard away from two gliders one time and simply put, I lost.  Once the gliders get a hold of something like that, they will not let go!

I am a fairly new owner of sugar gliders (less than 1 year) and recently signed up to receive your newsletter.  The section about using roaches (palmetto bugs) to feed to gliders caught my attention.

We had an indoor cat that once ate a palmetto roach when we lived in Florida.  At the time, we did not know what it was and so put it in a jar to have it ID’d at the vet.  Along with the roach were some rubber
bands that the cat had also eaten and these also went into the jar.

When the rubber bands started moving, we realized that they were very large worms.  The vet immediately knew that the worms had come from the roach that the cat had eaten.  After this experience, I don’t think I would ever want to feed my gliders Palmetto roaches, even if they were considered okay to use as food!!!

Oh my.  I was not suggesting that you feed palmetto bugs.  I better clarify that for you and for anyone else who may have misunderstood the intention of that article.  Just like mealworms that are farm raised to be fed to other animals, there is a class of “feeders” called feeder roaches, which are raised in a more sterile environment.  Our vet does not recommend feeding any kind of “wild bug” even ones that are known to be ok because they can come into contact with many things that are not healthy, like worms, nematodes, and pesticides.

I don’t even think the feeder roaches are of the palmetto bug variety. I was really just talking about my own personal experience with roaches (and aversion to them).  I do plan to do more research on the concept of feeder roaches and hope to share this in the future, but household roaches are a definite No No!

The Gliders That Own Me
by Lisa

Over the years, we’ve covered lots of topics.  Some of these topics were brand new to the glider community, some of them controversial and in all of the years doing this, I’ve never seen such huge e-mail response as I did with last month’s newsletter about the passing of my sugar glider, Janine.  I thank you all deeply for your kind words and loving outreach.  I am truly touched by it all.  In addition to the tremendous influence of so many kind people, I’ve also managed a new diversion that I’d like share with you now.

You can’t ever replace a lost soul.  But I have found that new babies have at least helped fill the void in my life.  This is the story of Boudreaux (Boo-droe) and Thibodeaux (Tibby-doe) and how they’ve come to be part of the family.

A few months before Janine became ill, I had a very disheartening event with one of my trios of breeding gliders.  Paul, a white faced male lived with Ginger and Maryann.  One day I was checking on them and Maryann had a rather large wound on her back.  We’ve seen this before and is often the result of some overzealous breeding.  So we went to the vet to get an antibiotic ointment and have Maryann checked.

While the wound was fairly large, it did not require stitching at this point.  Well long story short, I had separated Maryann, but she went into a fast depression.  She was very lethargic and much less responsive than usual.  So under a cautious warning, we decided to let her go back in with Paul and Ginger.

Things were fine for a few days, but then it got severe.  The other gliders were likely over-grooming the wound area and it was not much better and starting to show infection in spite of the treatment, so I had to separate her.

Within 24 hours, she had passed and I know deep in my heart that the separation anxiety got to her.  I could have left her with Ginger, but in the meantime Ginger has two joeys out of pouch and the tips of both of their tails had been bitten off and both had bad scabbing on the right side of their faces.

These joeys are now Boudreaux and Thibodeaux.  I took the babies early as this is often an early sign of cannibalization and chose to hand rear these little guys.  As a good friend of mine put it, it seems that “Ginger snapped” and I’m not sure that it was not Ginger’s doing that led to Maryann’s untimely demise.

Boudreaux and Thibodeaux were about three weeks out of pouch when I decided to take them from Ginger and amazingly started to eat much on their own within days.  Thibodeaux was much smaller than Boudreaux and gave me the most cause for concern, but he’s a spunky little guy and in perfect health today.

The little guys started off in a small “plastic hospital aquarium” set up like an incubator, and within a few days outgrew that.  I then put them in a small parakeet cage and that lasted only a week before they graduated to a big boy cage which was still on the small side for active little gliders.  On Valentine’s Day I moved Boudreaux and Thibodeaux into our rectangular deluxe cage with a much older retired female (Vivian) and a year old female (Dora the Explorer).

Introducing colonies is not always an easy thing to do and I felt that Vivian would be ok with the little guys, but Dora is a very curious and  quite active young female.  Much to my delight, it was love at first sight all the way around.  I didn’t hear a single crab as the curious young males begged for piggyback rides and snuggled super close with the two older females.  The females taught the young gliders how to groom themselves and did things in the learning stages for sugar gliders that I simply could not do as a surrogate mother.  I wish things always went this easy with introductions, but I must warn you that is not always the case.

I’ve also learned from this experience that it’s never too late for gliders to learn new things.  You see, we’re guessing Vivian’s age at about 12 years old and she’s always had a nest box, not a sleeping pouch.  It took a few days of Vivi sleeping in her box and the other three in the warm cozy pouch, but by day four, I found the foursome all sleeping peacefully together in one pouch, even though they had a choice of three in the habitat.

Boudreaux and Thibodeaux have since been neutered and although they are brothers, they have two very different personalities.  I’m delighted to see that Thibodeaux is emerging in very much the same outgoing way his Uncle Arnold did as a young glider.  Thibodeaux is outgoing, curious and super friendly.  Boudreaux is also very friendly, but not nearly as silly as his littler brother.  They don’t even look alike.  Boudreaux is a big boned normal gray glider and Thibodeaux is a smaller in stature, but larger than life, white faced blonde.

And while no number of new gliders can replace Janine and who she was, having new babies as part of the permanent family has brought great joy to us.  It’s been awhile since I’ve kept any new gliders for myself, and little did I know that when Boudreaux and Thibodeaux entered under such sad circumstances, that Janine was going to get sick and pass on.  I think someone was looking out for me and gave me a gift before my loss.

Arnold lives in his house just about five feet away from the new glider family and I’ve caught him trying to sneak into their cage.  He really likes his new neighbors, a lot!  This too is not always typical of sugar gliders in established colonies.  Arnold’s colony mate Buddy is not so enamored with the new neighbors and does not like when the babies jump on his house, so we do maintain separate handling times to  keep peace and balance with the seven living in the big house.