I found a sugar glider in my yard…garage…attic…house … what do I do?
by Lisa 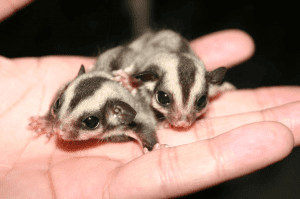 Click here to see a picture of our very own Chief Gliding Officer, Arnold, showing off his long, beautiful tail.  And click here to see a picture of Morgan, the sugar glider in full glide, just like the flying squirrel picture above.  Do you see the difference in the tail? These animals do actually have a bit of difference in color, as well as markings. But from the pictures, the easiest way to tell is by the tail. Is that what they mean by a telltale sign?!

So now that you have an easy way to know what it is that you’ve actually found roaming around your property, what do you do? My best suggestion is to call some of your local vet offices and see who they know in the area that specializes in squirrel rescue. Since the flying squirrels are indigenous natives to much of North America and Central America, it is best that the animals are raised and treated in a manner that will make them suitable for release back into nature. The most important factor in preparing them for release is to not handle them extensively. If you do, they will lose their natural fear of people (and other household pets), and this can make them vulnerable if released. Many squirrels are found because the cat brought them home, so if you happen to have a nice cat, then the squirrel will learn that cats are nice, which is not always true. Cats are skillful hunters, particularly ones that live outdoors.

Your best bet is to find an experienced rehabilitator that will raise the squirrel or squirrels for you and prepare them for future release. And unless you want a bite on the nose, never call your sugar glider a squirrel. They are very different animals from a biological definition and with that come different standards for good husbandry.

Some people do keep flying squirrels as pets, but before you do so, check with your state laws. Some states prohibit keeping indigenous animals as pets. But don’t ask me about flying squirrel husbandry, because I just don’t know. I know lots about sugar gliders, but I’m not well versed in the husbandry requirements for any other animals, even if they do look quite a bit alike.

Dear Lisa,
Do you have the Double Sturdy Sugar Glider Cage? If so, what colors? Thanks!
Bittorf

Click here to see the Sturdy Cage model we carry at SunCoast; now click here to see the Double Sturdy Cage, which we do not carry or recommend.  We do not carry the Sturdy Cage in the double version for a very good reason.  The problem we see with the divider wall between the two sides of the cage is that it allows gliders on either side to touch each other.  We are afraid that if people use this with breeding sugar gliders, it may increase the risk of joeys being killed or maimed by the gliders next door. Gliders can be very territorial and if you use a cage of this style with a breeding pair on one or both sides, you may be very upset by the results.

When we first started breeding sugar gliders, we had a horrible incident with cage placements too close together. It is unfortunate, but some lessons have to be learned the hard way and we hope to spare you such an experience. We have since kept our breeding glider cages 6-8 inches apart from each other.

I went into the Sugar Shack one morning and found a half eaten joey pulled through the wires of its cage toward the cage next door. It was one of the worst days in my experiences of dealing with sugar gliders.

I know that sometimes things happen out of the ordinary, but I’ve had enough discussions with enough people over the years to know that this was not a simple aberration. Other grief stricken glider keepers have called to share the same exact story.

And death is not the only issue either. Gliders with short tails or missing limbs are often the result of breeding conditions that are too close. If we offered this cage, I can fairly well predict that some people would use this type of cage against our recommendations.  As a result, I cannot in good conscience sell something that I think will put the animals at increased risk.

Hi Lisa,
Two things.  First I want to thank you for the newsletter – as usual it was great and informative. I thought I would pass on an idea for the gliders – my little ones as well, big Geo and little Zesty – I put a large roll (like a mailing tube) in their cage.  It is about 2 feet long and I put a large dowel from one end of the cage to the other with the tube hanging from it. The dowels are stationary because I made it like a bird perch – anchoring them to the cage bars, thus making it like a long tunnel with the tube about 4 inches wide. They love it and it is made of cardboard, so it won’t hurt them and they have been nesting in it. The funny thing is they come out of both ends.  Well, usually the one on the left because they have managed to push the tube all the way to the bars on the other end. I move it back and they move it back to the end!  But at night, just before they start creeping out, they check out the food dishes from the side end (this way they think we don’t see the hidden escape route) and then they scamper over to the other end, where they come diving out to get a bite and then go about their business (but have to have a bite first). I have been using this for about two months now and that is their preferred place to sleep. Just a thought –
Judy

Hi Judy! This is a cool idea! And let me add to this as well. We’ve been using toilet paper cores for years, especially with the babies. Recycling is a great way to create free and safe stimulation for your gliders. I have a couple of friends that did something very similar to what you have described, but with a twist. They cut a couple of random holes in the tube to create extra peek-a-boo opportunities. Cardboard does not pose a hazard to the gliders, but here is a word of caution. Make sure that you are either using a tube width that is plenty wide enough for the gliders to get through easily. We’ve had reports of gliders getting trapped in thinner tubes (like the type you might find on gift wrap paper). The toilet paper cores may be a bit narrow, but because they are so short, we’ve not had any incidents or reported incidents of problems using the narrower, but short, cores.

Having a mixture of store bought toys and recycled items is a great way to create a fun, changing and stimulating environment for your sugar gliders. And the best part is that once it gets all grungy, you don’t need to wash it, just toss it and recycle something new!

‘Til next time, in good health for you and your sugar gliders!