What to look for when your sugar glider loses its companion?
by Lisa 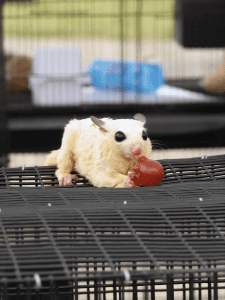 Sugar gliders are so individually unique and while we may generalize a lot of facts about them, there is nothing better than good observation in making the best decisions for the sugar glider’s well being.

The specific question I want to address today is what do we look for when you had two sugar gliders and one of them passes on.  You already know we are HUGE advocates of sugar gliders being kept in at least pairs.  It is a challenge for someone inexperienced and unfamiliar with particular sugar gliders to discern whether or not they are experiencing signs of depression.  Yet, depression can be a major issue for sugar gliders.

For those of you who have had your sugar gliders for some significant period of time, you have had the opportunity to become familiar with their patterns including activity level, eating habits, and sleeping habits.  These are the primary areas you want to keep close observation on and see if anything changes when your sugar glider loses a companion.

If you observe the activity level changing, then see this and understand it as either an expression of depression or grieving.  Yes, sugar gliders do have both of these experiences.  On one extreme, you might see your glider more frantic during odd times, as if it is looking for something (or someone).  This is fairly obvious when observed, and to me, speaks to the fact that the sugar glider is grieving the absence of its friend.  On the other extreme, you may notice a decline in activity, and this may be an expression of both depression and grieving.  I find both of these situations concerning and something should be done to resolve the situation.

You may see a change in eating patterns.  Typically with depression, you will observe the sugar glider eating less.  Rarely do I hear that the newly single glider eats more, but the eating pattern can often stay the same as well.  Over time, under-eating  can lead to nutritional starvation, and action should be taken as soon as possible to either find a new companion, or re-home your sugar glider to someone else that is in a similar situation.  If you notice that the sugar glider tends to sleep more and come out of the nest less frequently, again we are looking at some mix of depression / grief.

Sugar gliders have a long life span.  In situations where you have two sugar gliders and have had them for many years, getting babies to put in with a ten year old sugar glider may overwhelm the older sugar glider, OR it may reject the new sugar gliders because of its established, long term bond with the deceased glider.  It can be done, and I’ve successfully done it myself.  Some older gliders will be rejuvenated by the presence of younger sugar gliders, while other older gliders will want nothing to do with the exuberance of youth.  I am in the fortunate position of having choices available, as we have more than a few in our colony, making things easier to “custom fit” the matches.  But most glider keepers do not have this luxury.

There are also people that aren’t really wanting to sign on for another long term commitment, for whatever reason.  It is a big responsibility and perhaps the family has more leisure time and would like to travel more, so another long term obligation is something to seriously consider.  While I am an advocate of sugar gliders having forever homes, I am also a realist.  Sometimes renewing into another long term commitment is not the right action for this human family any longer.  There are others out there who want a similarly aged sugar glider to fill a void created by death.  In this case, re-homing may be the best idea.  Just trust your gut as to whether the new home is going to care for your surviving glider as well as you had.

Now I would like to share a story with you.  The moral of this story is sometimes there is nothing you can do about the grief.  I had two sugar gliders awhile back; their names were Charles and Gaynell. Charles was about three times bigger than Gaynell, and they were “in love”.  I generally do not like when people attach human traits to animals, but sometimes it’s hard to ignore what you see – you just can’t deny the evidence.  For example, whenever we would feed this pair, they never ate on their own.  They would snuggle side by side, pick up morsels and feed each other.  I’ve never seen anything like it before, or since.  When we retired Gaynell, I decided to have Charles neutered so they could live the rest of their natural lives together.

Charles and Gaynell had a few more good years together.  Then Gaynell’s time came.  Remember I told you Charles was quite a huge fellow?  Within a week, he just died.  He showed the signs of frantic searching, but he wasn’t losing weight (although he could have afforded to lose a bit).  He just died.  Sometimes this is the way it goes.  Most sugar gliders will accept new friends.  And while Charles was OK being put in a cage with others, he still died less than a week after his Gaynell passed away.

While this is an extreme case of depression and grief (and is in no way what typically happens), I thought it may be of value to emphasize the point of just how important companionship is for sugar gliders.  Nearly all cases of grieving sugar gliders can be resolved healthily and most of the time, there is a suitable replacement companion for every glider.  But occasionally, no other companion will relieve the grief.

Is it OK to let a lot of people meet your new sugar gliders?
by Lisa

I really appreciate when I hear this question.  I can tell that the soon-to-be-glider-keepers are really considering the effects of change on their new arrivals.  I think it is a thoughtful question and tells me clearly that the prospective new humans are tuned in to the potential for overstressing new animals when they first come into the home.

Having said all that, my answer on this may surprise you.  It is not a matter of how many people meet your new sugar gliders in the first couple of days, or even in the first couple of weeks.  What does matter is how those people respond.  One person with an overly excited, anxious or fearful personality in the early going can have a negative impact on glider reaction over time.

Animals pick up on our energy.  Calmness, confidence, and sure handedness will bring out the best in new sugar gliders.  These are critical attributes in bonding.  People who get frustrated, or exhibit fear of this new little critter will not get as good of a response from new sugar gliders as the calm person will.  Some people even get angry when gliders don’t respond as the person expects they should.  People with unrealistic expectations are often disappointed, and remember, there is no such thing as an instant pet.  Bonding is about trust, and trust is earned.  We can earn that trust much quicker if we just keep ourselves calm during the process.

So, my answer to this question is it’s not so much about how many new people meet your sugar gliders right away, it’s about how these meetings proceed.  I strongly suggest that you give your family and friends a little talk before you introduce them to the gliders and ask them to maintain calmness when you bring them in to see your  adorable little fuzzbutts.

We have a long term customer who works at SeaWorld, and she could probably fill a room with her SeaWorld co-workers that are all used to working with a wide variety of species.  She finds it benefits the sugar gliders to be around a bunch of people that are really smart about animal interaction – the whisperer types.  Going the other way, it could be a negative to introduce gliders to that one person who just has to scream “omigod, they are sooooooo cute”, or “Will it bite me?!  Will it bite me?!  Will it bite me?!”  If you cannot trust that your family or friends can maintain their composure upon first introduction, then definitely wait until the gliders are acclimated to your home and bonding progress has been made between you and the sugar gliders.

I could say this more simply by suggesting it is not the quantity of the people you bring in to show off to, but the quality of their individual temperaments.  Some little kids will squeal in utter delight, so you might ask the parents to keep those kids out to start with.  Yet there are other very young children that have natural composure and will stay quiet and respectful.  Trust your own instinct to know if the people you want to show off to will bring a calm presence to the meeting, and if not, then it’s better to wait until the sugar gliders have at least begun acclimating to their new surroundings and new people.

There are a variety of reasons that people ask us about having more than one cage for their single colony of sugar gliders.  Some people have weekend homes that they frequent.  Other folks travel by car a great deal.  Divorced people might share custody of children and pets, allowing the pets to go along with the children. Whatever the reason is, the necessity for a single colony living in multiple cages sometimes comes up.

Sugar gliders are territorial and we can use this fact to our advantage when the need for multiple cages arises.  I don’t think that it is critical that you have two cages of the same model, although many people do go this route.  Science soundly supports the idea that sugar gliders identify their territory more by scent than anything else.  So having identical cages, with identical toys, is a relative non-factor.  I say this because there are instances this can make a big difference.

For example, if you have a six foot habitat in one home and two foot habitat in another (which is undersized), this will likely add undue stress.  Sugar gliders are creatures of habit, and while the habitats may be laid out differently, relative size should be as close as you can manage so that their habitual playing patterns can be maintained easily.  Having toys and wheels of a different nature or in different places can actually add to enrichment, which is one of my favorite topics.  Enrichment essentially seeks to prevent boredom for these very curious natured, high metabolism animals.

Since scent is thought to be the primary method sugar gliders use to identify their territory, then make sure that you bring along “scented” items to populate the other cage.  Perhaps this could be their sleeping pouch or a few favorite toys.  While you may pack clean laundry for yourself on a trip away, I suggest you not wash a few of the sugar gliders’ scented items so that the new cage will smell like home to them.  This approach can alleviate a lot of stress on them.  For those of you who travel frequently, and visit your lake cottage on a regular basis, of course the sugar gliders will scent that cage in time.  If you are an obsessive cleaner, only clean some of the items in one day and leave some of the items scented.  This is an easy way to manage multiple habitats for territorial animals.