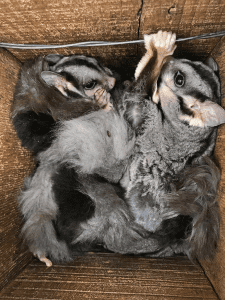 We started raising and selling sugar gliders in 1999 and over the years have had the opportunity to talk to, email and otherwise correspond with tens of thousands of people.  Sugar gliders are the only animals we have ever raised and the only animal we intend to ever raise.  In other words, our lives are devoted purely to the proper husbandry and education of the fabulous pretaurus breviceps!

Now I’m going to out myself.  In the early days, while we always encouraged new glider keepers to keep at least two of them, there were exceptions that I would make based upon a person’s lifestyle.  I was new to it all, and frankly didn’t know better.  People who work from home, or are homebound are in the position to give sugar gliders a great deal of attention, right?  So on special occasions, I used to let people get just one if they had what I thought was a lifestyle that could afford a great deal of time devoted to their single glider.  Quite honestly, I was acting out of ignorance and basing decisions on that which I read and heard from others.

It didn’t take long for me to realize the error of my ways.  When I started seeing things differently, I felt honoring the true nature of sugar gliders by insisting on glider buddies was important.

One of my favorite recurring stories that I’ve heard countless times over the years is from people who had single gliders.  In many cases, these people had “all the time in the world” to spend with their single glider and then a lifestyle change took place which meant less time to spend with the long lived furry one.  Of course, I’m only speaking to those people who have their own high level of awareness and understood that their little buddy would likely be better off with a new little buddy that looked like them.  I’m sure there are many out there that aren’t involved in the online glider community and have absolutely no idea that their sugar glider would be a happier, better mentally adjusted little animal with a friend of its own kind.

What makes this one of my favorite recurring stories is that in most cases, once a new glider was identified and brought home, most people saw dramatic and good changes in the habits of their original pet.  I will often hear things like “my first glider, named Numero Uno is now more playful and active, isn’t such a picky eater any more, doesn’t sleep as much, seems happier”, and so on and so on.

I’ve said it before and I’ll say it again.  Even with our best intentions, there are several things that we can’t do for sugar gliders that other sugar gliders can do.  Just to name a few we can’t stay up and play with them all night.  As nocturnal animals, this is a natural part of their colony behavior.  They also groom each other as monkeys do.  We certainly can’t do that for them either.  When groups of sugar gliders sleep together, if you peek in the pouch, you will be hard pressed to know which body part belongs to whom as they are nestled in a single larger ball of fur, feet, ears, tails, and noses.

We can’t do this for them either.

Keeping exotic animals is a privilege we have, not a right!  And I think if we are to keep any sort of animal, we need to do so in a way that best honors their true nature.  I think those who continue to sell sugar gliders as single pets may be guilty of ignorance, or they may be subject to arrogance.  Anyone who thinks they know better than Mother Nature herself is likely an arrogant person.  It is a hard thing indeed for most of us to really understand the full power, beauty and brilliance of nature.  And there are those who think they can do better than nature, the results are often disastrous.  We should accept nature as it is, and bending the rules of nature to accommodate our own goals is not in anyone’s best interests, human or animal.

In parting, I hope to say to those of you who have been misled by an ignorant or arrogant breeder, broker, pet store, etc, please take to heart what I’m telling you.  Sugar gliders need other sugar gliders.  Do what is right for their sake and you will be rewarded with happier, better adjusted companions.  You might even hear some veterinarians say they are ok alone, but even Doctors are not anywhere near the intelligence of nature and can be prone to the human conditions of ignorance or arrogance as well.  If your vet tells you this, I encourage you to find a new vet.  One that is in tune with the true Nature of the animals we love.

Experience can be a great teacher.  I shared with you in the previous article how experience was extremely beneficial to me in learning more about sugar gliders.  Having the personal experience far exceeds what I’ve learned from books, websites and chat rooms.

Inexperience can also be a great teacher.  Have you ever looked at life through the eyes of a child?  Have you ever heard it said that kid’s can say the darndest things?  When looking at life with uninfluenced views, people will see things that are so obvious at times, that the whole rest of the world seems to miss.

Case in point, I got a call from a young lady named Sara.  When she got her sugar gliders, she was very intimidated by the “crabbing” sound and could not help but jump and get startled when she heard it.  She called me and told me that she decided to use ear plugs as she was clearly in tune with the fact that the sound made her startle, so she just got rid of the sound in a simple and effective way.  This tool worked well in her case and I think it’s brilliant.

When bonding with gliders, the calmer we are in the process, the quicker results will happen in the whole trust building exercise.  I usually like to test ideas myself before I share the idea with others, but I’m not startled by the crabbing.  I’m not a good candidate to test this theory, but it makes perfect sense.

Earplugs are very inexpensive and if you get startled by sugar glider fussiness, get some ear plugs.  They are safe for you, safe for sugar gliders and might be just the edge you need to stay calm and focused in the bonding process.

We’d love feedback from new glider keepers if this simple trick helps you toward better progress!

There are many articles about bonding on our site; review by going here.  It’s not really about having a single trick in your tactical approach, but trying ideas that bring the best progress.  You might want to start with our six part series on bonding, which starts here.

Why Veterinary Wellness Visits are Important
By Lisa

I love getting questions and I love being in a position to answer those questions.  However, there is one question that I get fairly often that I don’t find particularly pleasant.  It goes a bit like this. “I understand that sugar gliders do not need vet visits because they don’t need shots or vaccines.  Is this true?”

How does stuff like this get out there and why do so many people believe it?  Yes it is true that sugar gliders do not need shots or vaccines, but this does not let us off the hook for having a good, knowledgeable vet lined up for our pets not only in the event of emergency, but also for annual wellness visits.  This is part, a big part of responsible pet keeping.

Why are annual wellness visits necessary?  I can think of two really good reasons off the top of my head.

First off, if your vet does not have familiarity with your pets as healthy little ones, it is harder to treat them when sick.  It is helpful to the veterinarian to have a baseline understanding of who your healthy pet is.  This is particularly true with species that have wide ranging personalities like sugar gliders. dogs and cats, etc.  One may be just “laid back” and this can be misread as lethargic which could indicate a serious health condition.  Same thing could be true with a hyperactive pet.  The personality of the pet can easily become part of the vet’s assessment in trying to reach a good diagnosis.  If your vet knows your animals in advance, then it eliminates personality traits as part of the diagnosis when problems arrive.

Many people complain that there are not many experienced vets out there.  Fact is, most people don’t seek a vet until they need one, so many, if not most of the sugar gliders that veterinarians see are very sick little animals.  Unlike dogs, where we must bring them in for shots and vaccines, most people ignore the importance of regular (at least annual) vet visits.  Not only does it benefit the animal should it come down with a medical condition, but it also helps broaden the experience of vets treating such animals.

Veterinarians can often see when medical conditions start to develop,  where most people cannot.  Using basic diagnostic techniques like urine and fecal samples, checking ears, nose and mouth, and gently palpating the animal can often indicate that there is a beginning to some medical condition.  When caught early, the results are often pleasing.  When caught too late, the results are often morbid.  It is our responsibility to take the very best care of our animals that we can.  Part of that is bringing them in for regular wellness exams.  If its good enough for Fido, it should be good enough for Sugar Plum too!

‘Til next time – in good health for you and your gliders, we sign off in appreciation of all of you who share great glider adventures with us!