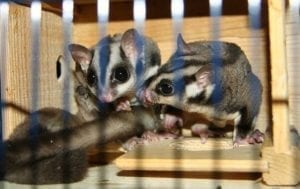 Do you think removing odors from cleaning my gliders’ cage will cause my gliders to re-mark up their territory again? I’ve got one female and one male and neither are neutered or spade.

Arnold, CGO (Chief Excetuive Glider) here!  Just one thing about an intact male glider: he marks.  Now if you use smell-remover products in da mornin’, he’z probly gonna just sleep all day ‘cuz boyz don’t usually wake up from deep sleep and say “oh no, it smellz too good in here – time to make it smell allright again!”  But at night, yer favey fuzzy might wanna fix his pad back up to da way he likes again.

It creates one of those circles that’ll make ya just chase yer tail ’round & round again.  Me glider gang is workin’ on some experiments on wayz to help controlling intact male odor a lot easier so it’ll be less smelly to yer hooman noses.  But all in good time, me hooman friend – patience is a vulture…errrr I mean virtue (sowwy, got Hallowheeeen on da mind!). In da meantime, yer best treatment is to have his pockets picked…ya know, neuter him!

Dear Arnold,
Mama Bell has two joeys.  We had the sleeping pouch out of the cage Monday night and we could see the joeys.  They were both out the pouch but nursing.  They are getting some fur and they have the strip down the back.  Can you guess about how old they are?  We first saw one on Sept. 12.

Also, Mama Bell and Dad Jingles have been fighting in the morning.

Mama Bell has been out at night without the joeys, I know that they do that sometimes.  The other morning both mama and dad were out and the joeys were in the sleeping pouch, a little while later dad had gone back in the sleeping pouch and mama was still out.  How long can the joeys be by theirselves before it is a problem?

I just hope I do right for the joeys.  I am kind of concerned about Bell and Jingles fighting and mama Bell getting pregnant again too soon.  I also don’t want to separate them.  Don’t want to cause any stress.  I am actually scarred of handling them too much, we have been gone a lot lately, don’t want upset them.

I think Jingles has taken on the role of a protective dad.  Bell on the other had has been a lot calmer and easier to handle.  Jingles has started to bite me.  I do appreciate all you and your crew does for us, I don’t think I would still have my gliders if I didn’t have you there to help.  I get a lot of needed info from your news letters.  Thanks again.

Dear Rachel,
Sounds like youz guyz have lots of jinglin’ bells at yer house – yuk yuk yuk!  When suggie gliders eyes open, they’re probly ’bout ten days OOP.  Methinks Jingles may be tryin’ to ring Mama’s Bell again.  Itz not unusual for a male glider to wanna breed right after joeys come out – ya know how boyz can be!  But with young babies to care for already, Ma Bell’s probly not much in da mood.  Maybe you can tell Mr. Jingler Ma’s got a headache or sumptin’?!

Ma Bell will start leaving the babies to have some time to herself and Jinglin’ Daddy will usually be the one to go back and stay with them.  Between Mom and Dad, those babes probly won’t be left unsupervised for more than 10-15 minutes.

Not such a good idea to separate Ma & Pa.  It may sound kinda harsh, but the best way to prevent breeding is to get ole daddy “de-jingled”, if ya know what I mean.  Sorry ’bout that, Daddy J – it happens to the best of us!

Vets Speak Out (or Not?) on Pellet Food

In our August and September newsletters, we wrote a two-part series having to do with pelleted foods.  Part I was on the topic of many gliders benefiting from access to food during the day.  Part IIdiscussed the fact that professionals with experience feeding exotics prefer using pellet foods as part of the diet (not just as a snack) because of this behavior.

In closing last month’s article, we posed the following question to the sugar glider community:

“Before we sign off this month, I would like to ask for your feedback on this topic.  What we are looking for in particular is ANYONE who has first hand knowledge of a veterinarian or animal nutritionist with zoo or exotic experience who believes that a diet without a good high quality pellet food is the best approach.  Many message board members swear up and down that this is absolute truth.  Please contact me with a name and phone number of those doctors.  I will try my best to contact them for an interview in a future newsletter.”

Not one person sent us the name of a vet who is opposed to feeding high quality, animal specific pellets to sugar gliders.  What we DID receive was the exact opposite of what we asked for!  We received responses from about a half dozen people with the names and phone numbers of their vets who are very much in favor of using a high quality pellet food as part of an overall diet plan with sugar gliders.

The above request also sparked discussions on both the major message boards, Glider Central and Glider Gossip.  Many people on those boards favor a “no pellets” approach, but we were not contacted with any vet info.  And that’s OK!  We’re not trying to be “right” about diet – everyone has reasons why they approach diet a specific way.  We’re simply trying to point out that the “all pellets are bad” philosophy is hard to understand, given the evidence of exotic professionals – both vets and nutritionists – endorsing the use of pellets.  If you want to know more about why they do, read Part II.

We even received an email from a national zoo in the U.S., who was kind enough to share actual correspondence between the animal keeper, zoo veterinarian and the commissary director regardingWholesome Balance. There was also quite a bit of feedback from members of the community who expressed “relief” to know they are making a good choice by following their vet’s advice and feeding a high quality pellet food as part of their sugar gliders’ overall diet plan.

These articles are intended to help glider keepers understand that the majority of experts do indeed support a high quality pellet as part of the diet (not as a treat, but as part of the diet).  We know there will always be some people who believe differently, and of course it is their right to do so.  We just wish to point out that the widely accepted professional viewpoint on glider diet is that a pellet is a fundamental part of good husbandry practices.

Thanks to everyone who took the time to share information and feedback with us on this topic!  We’re still open to hearing from vets or nutritionists with exotic experience who believe a high quality, animal-specific pellet should not be part of a sugar glider’s diet.