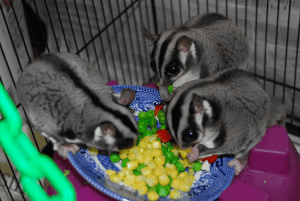 Last month we talked about keeping a “breeding pair”, defined by one non-neutered male and one female; we also delved into whether it was best to have a pair that is not neutered.  These are two different experiences; to review this article click here.

In general, I encourage everyone to consider starting off with a non-breeding pair.  It is very important to get to know the animals first, which teaches you how to care for them.  Once you have gained that experience and knowledge, you can always consider getting into breeding, should you want to experience full blown glider-itis!

Here’s one cool thing about sugar gliders.  By starting off with a neutered male and a female, you always have the option to bring an intact male into the mix later on (if and only if you decide you want to delve into the full blown joey experience).  Having a neutered male and a female pair does not mean you have officially declared you will only own a non-breeding pair.

If you start with two females, and then add an intact male later, please be mindful that you may likely end up with twice as many joeys since an intact male will breed with multiple females.  With twice as many joeys, you will have higher neutering costs.  Additionally, the chances for inbreeding increase because the joeys share a common father, which still makes them siblings.

In my experience, it is best if the two females grow up together. Introducing two older females increases the risk of “joey robbing”, where one female will take the joeys from the other pouch and kill it. It is an extremely unpleasant situation to experience.

If you start with a neutered male and female, you can have a very nice experience and not overpopulate at the same time.  It is profoundly interesting to see how colony mentality works and the neutered male will still be a part of the colony or “family unit”.  He will participate in being part of that family and will still sleep in the nest box or sleeping pouch, just as he always has.  Neutered males will typically not interfere with the mating rituals, nor child rearing activities and can actually participate.  How cool is that?!

I’m going to take this opportunity to re-iterate what I said last month, which is that most families are best starting off with a plan to have the best pet experience.  You can always leave the door open to have a breeding experience just by picking the right sexes to start with.  This is what I’d call having your mealworm and eating it too!
Just be sure you understand introduction procedures before just bringing home that new boy. For additional information on proper introduction procedures, click here.

I’m concerned about BPA in my sugar gliders’ plastic toys.  Please advise.  Thanks.

Errrrr, had to turn this question over to da Glider Gang bcuz BPA isn’t sumptin’ we gliders know too much about.  Herez what them say:

“BPA is really only a concern with polycarbonate plastic feeding and drinking wares, as BPA can leach into food and water over time. SunCoast Sugar Gliders has always offered glass water bottles and stainless steel feeding cups, so no BPA concerns there.”

It is most important to know that this potential hazard is of primary concern when it involves consistent exposure to ingestible material, like food and water.  However, if for some reason you are concerned about contact of any kind with plastic that may leech BPA, our manufacturers have told us their toys are not made from the kinds of plastic or epoxy that might contain BPA, so there are no BPA issues on toy products we offer.

So dat’s da deal, Mum!  Hope that answer helps ya out.

What kind of bedding and nesting do you recommend for sugar gliders?  Thank you!

Bedding is a fave subject of mine cuz meluvs a good, long nap!  If ya’re talkin’ about the kinda bedding that lines the cage floor to catch food fight stuff, poopies and tinkies, then meknows SunCoast uses newspaper as a cage liner.

However, in a purty cage like our Sturdy Sugar Glider Cage, newspaper just looks ugly bcuz of the round bottom.  So wood shavings made from aspen are a purtier choice.  Be sure to avoid pine and cedar, ‘cuz the aromatics could potentially damage our li’l lungs.  SunCoast has heard lots of positive feedback on reconstituted beddings like Carefresh bedding.  Just besure ya use an unscented, natural bedding.

Now if ya’re talking about “nesting” material – ya know  stuff that we gliders like to drag into a box or hut, strips of fleece work great!  Mum usually tosses handfuls of scrap fleece into our cages at night.  And then we get to pick our own pieces to build our own nests – we’re purty smart like dat!  The Lisa tree says giving us stuff to do like this is called en-rich-ment ’cause it’s like livin’ in the forest where we get sticks and leaves and build our own bedding.

Last week, I had several vet appointments set, and one not actually for a sugar glider, rather for my dog, Breesy.  Our appointment was on a Friday and I had started noticing earlier in the week that Breesy was acting very out of sorts.  She’s only two years old and rather calm for a young pup, but not last week!  She’s generally with me nearly everywhere I go and was shaking like a leaf, for three days straight.  I knew we had an upcoming vet visit and although all of her other habits were quite normal, she had this shake and quiver like something was scaring her out of her mind.

I took note of that and began to closely observe my other animals, and the majority were also acting out of sorts, in a very high strung, rather hyper-vigilant, agitated sort of way.

It was a week of a big full moon, but I’ve never really seen any significant behavior changes with my animals during full moon weeks. This was quite odd and extraordinary.

If you’ve ever called our main phone number, Rob is the very kind voice on the other end of the phone.  In the midst of erratic cell phone issues, erratic internet service and hyperactive animals, I said to Rob in jest, “I wonder if we’re having some sort of big solar storm”, to which he replied, “Of course we are; it’s been all over the news.”  Rob just forgot that I don’t typically watch news on television or online; as for newspapers, well, we use those to line our cages!

When I went to the vet last Friday, I was talking to some of the technicians telling them about Breesy’s bizarre behavior and how most of my sugar gliders were quite agitated, mentioning I thought perhaps it was solar storm activity.  They just started laughing, because it was a topic of conversation all week at the Vet’s office, and when the Dr. walked in, he joined the talk as well.  They noticed that many of the animals with whom they were familiar were acting strangely (as were many of their humans).  They said it was a pretty tough week at the clinic.

I thought this was interesting to share because it shows just how in tune and touch animals are to nature.  They often sense things that we humans do not.  I’ve heard from one source that when the tsunami’s hit Indonesia, no animals died.  Even the elephants knew in advance to head for the hills.  Wouldn’t it be wonderful if we still had the ability to be so sensitive to nature?  Smile … thanks for letting me just share a little story here.  Next time your animals act oddly, go online and see if there is something impacting Earth’s magnetic field. We can learn a lot from our animals if we just pay attention to them!