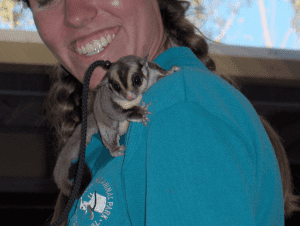 Following are just a small handful of emails we received last month concerning the topic of giardia.  We hope this will help drive home an important point and that you will be encouraged to seek medical attention for your sugar gliders should you see signs of diarrhea, weight loss or lack of growth in a baby sugar glider.  If you catch it in time, it is not that hard to treat.  But if you have a large infection, more than one treatment may be required, so make sure you see a vet and go back for the follow-up visit your vet is likely to recommend.  To read last month’s article, go here.

I just wanted to thank you for standing up for Suggies everywhere in regards to Giardia-Gate.  You know we need informed owners, who learn the facts as you present them, so they can make better decisions for themselves, and those that show interest in Suggies.

Keep up the fight!

My wife tells me she talked with you on the phone when all of this was going on with us.  Hello from her, & thanks for your help.

We had Gizmo for about 5 months when we lost him.  His sister fought off the first round of giardia, but we lost her about 6 weeks later when the giardia reappeared.  She had lost a lot of weight & the stress was just too much for her.  We went to 2 different vets in Des Moines, IA they were helpful, but this not a easy thing to test for, or to treat.  We now have 4 gliders, all doing well.  Keep up the good work, & tell people not to mess around, get to a vet ASAP.

I got my first glider back in 1998.  At that time I had been a tech at a local Vet practice for about 14 years.  We had 5 Dr.’s one of which treated exotic pets.

I had purchased a female who weighed in at about 65 grams.  She went for her first vet visit the day after I got her.  Upon examination of a direct fecal smear she had what appeared to be giardia, later ID’d as trichamonas through Tex. A&M (treatment the same) anyway….

I was accustomed in seeing giardia with pups from “mills” but what I saw with her about took me off my stool, the slide was “wall to wall” with the protozoa.  The Dr. Rx’d Flagyl, that temporarily took the numbers down but wouldn’t totally take it away…(cages and all sanitized) we finally put her and later others on “paromomycin” which was given about once a month, it was allot safer for them than the flagyl.  It seemed to help a lot.

3 years into my glider experience I was diagnosed with cancer, underwent surgery and began chemotherapy.  Chemo has allot of bad affects, but shortly after beginning I had about a 6 week bout of (severe) diarrhea.  I informed my oncologist about the gliders and what they had, he put me on the flagyl and after the treatment I was much better.  Now I can’t say 100% that it had anything to do with my exposure and yes, my hygiene was very, very good… however, since the little darlings would have access to a lot of different areas during play I wouldn’t dismiss an accidental “exposure”.

Main point being, it would be nice if someone who touched the lives of people with exotic pets of any sort, inform them to be on guard of potential problems should they encounter any scenario where their immune system was depressed due to illness.  Human Dr.’s won’t ask or even consider these things unless people inform them of possible exposure.  Was I exposed to the point of showing these ill signs?  Who can really say with 100% surety, perhaps a “normal” immune system in working order might keep it in check with minor signs but if the immune system is compromised in someway it could possibly open Pandora’s box of problems.

Sorry this is so long, I shortened it as much as I could.  Perhaps somewhere along the way this will help someone or some lovey/dovey glider.  Thanks a million, hang in there you’ve done a fantastic job for quite some time now.

Thank you for sharing your very poignant story.  First off, I hope you are fully recovered from your cancer treatments.  You’ve brought up some very good points the community should know about.  Your point about human Doctors not always asking questions about household pets is a great one.

Anyone with a depressed immune system should not be shy about bringing up this topic with your own physician.  Your point is also well received that sometimes in the diagnostic phase might initially indicate one thing, but it may really be another.  Identification of specific parasites is not always that easy.

We are all warm blooded animals, so cross infection can take place with a lot of parasites, protozoa and bacterial infections.  Good hygiene and strong immune systems will be enough for most of us, but certainly not all of us.

Best of luck to you for a full and speedy recovery.

Hi, I just wanted to pass along to you something which you did not mention in your article, and may not know.  Giardia is communicable to humans and can cause a person to be quite ill!  I’m a medical technologist and when I was working, one of my jobs was to test for the presence of this parasite.  I’ve spoken with people who were actually infected with giardia, and it’s not a bug to mess with.  So, if the occasion arises, you might want to let people know that they could catch giardia from their sugar gliders if the little cuties are infected.  FYI.

Thanks for your newsletters. I love reading them. Bless ya!

Thank you.  I am aware of this and several people have asked that we include this info in an upcoming newsletter, so here it is.  Last month, our intention was to stay focused on the misinformation directly, but I agree, people should know this is communicable to people and other household pets if the glider has it.  It is worth mentioning here again that not all gliders carry giardia, and for more info people on this people should read our original article.

Ever hear the saying “don’t drink the water?”  People often tell this to travelers to Mexico.  In humans, giardia is also referred to as Montezuma’s revenge … this is when people get giardia from tainted water.  As I understand it, one must come into contact with fecal matter, and fecal matter can get into water supplies – from any animal, not just sugar gliders.

Proper husbandry can prevent infection in the first place, but if you purchase an animal that is already infected, we hope the community will come to learn the signs and take the necessary steps to see a veterinarian.  Over the counter drugs will not get rid of it.

Sugar gliders are not major water consumers.  They get much of their moisture from the foods they eat.  A lot of people contact us concerned that the sugar gliders are not getting enough water from the bottle, but fact is an animal can only live a few short days without water.  If these sugar gliders were not getting enough water, they would dehydrate and pass rather quickly.  If you feed a meal with a high moisture content (for example, cantaloupe as the fruit serving), your sugar gliders will not drink much water that night from the bottle because the food is so rich in water content.

So now that you understand why we strongly suggest the use of water bottles, here is how we go about training them.  It’s easy!  First we’ll talk about the breeder case and then the owner case.

Basically, we let them train themselves.  When we take the sugar glider joeys from their parents habitat, I bring them all to my home in St Pete.  We take the babies from the parents after the parents had already started weaning them.  Sugar gliders learn much of their behavior from other sugar gliders.  Parents will lead them to feed dishes and the water bottle to introduce them to these new things.

I keep our joeys in cages starting with approximately five joeys per cage.  What I’ve found over the years is that most of the joeys already have a good idea about the water bottle.  We keep a close eye on how much liquid each cage consumes and check them for dehydration over the first couple of days of coming to the nursery.

It is rare that this happens, but on occasion I will have a group of babies that just doesn’t get it.  So what I do is put a joey from an overachiever cage into the underachiever cage and voila!  Now they all know how to use the water bottle.

This may be impractical advice for the smaller hobby breeder or owner because you don’t have an extra overachiever joey handy to help teach the new youngsters.  There is still a simple solution.  Put a dab of honey or yogurt on the tip of the water bottle.  This will attract the sugar gliders to lick off the sweet yummy stuff and the act of licking will activate the water bottle.  Once you see them do it one time, you know they have it figured out.

Here are a few more words of advice.  Do not offer both a water bottle and an open dish.  The gliders will always choose the easier open dish first and this will thwart your efforts to get them drinking from the water bottle.  I also use two water bottles per habitat. Water bottles can leak if the gasket is not properly set in the cap and if all the water leaks out, then you have a high risk of your critters dehydrating.  Water bottles are quite inexpensive so its cheap insurance to use two of them so you don’t have to worry about a faulty water bottle leaking out this critical substance.  We prefer glass water bottles because they are easily sterilized.

Last but not least, I use filtered water with all of my animals, dog and cat included.  Sugar gliders drink so little water that again its an inexpensive way to help preserve their health.  We have city water where I live, and the quality is OK, but from time to time news reports recommend boiling water because of breaches in the water system.  I don’t watch the news that much, so I would not want to miss this type of critical information.  It just feels right to me to use filtered water that I know is clean and pure.  I do not recommend using well water.  Most well water is generally classified as not safe for human consumption and it has to be at least OK for me if I am going to give it to my glider gang!